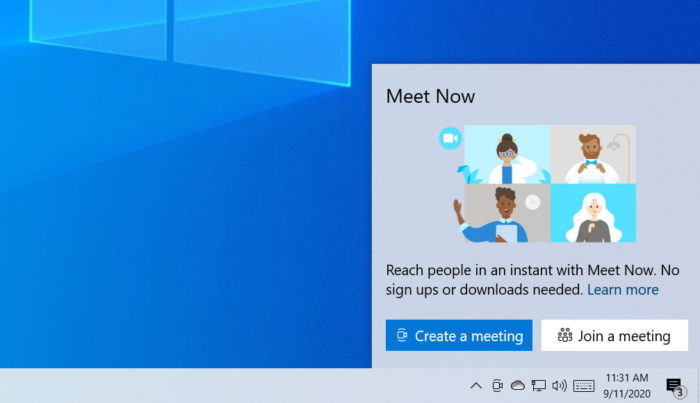 Skype has a Zoom-like functionality for video calls called Meet Now, which doesn't even require a Skype account the app installed. Microsoft wants to draw attention to this feature with a new button on the Windows 10 taskbar.

The new appeared a few weeks ago and was made official by Microsoft on Windows 10 build 20221, available to Insider users. “Now you can easily set up a video call and get in touch with friends and family in an instant by clicking the Meet Now icon in the notification area”, explains the company.

This feature is being released to some users in the Dev channel, formerly known as Fast Ring or fast mode, “ to help us quickly identify issues that could affect performance and reliability.” This will be rolled out to everyone on the Dev channel over time.

Skype Meet Now looks cool: you can create a video call in a few clicks, and invite people who don't have a Skype account. It is not necessary to have the app installed: videoconferencing can be done via the web, with support for Microsoft Edge (of course) and Google Chrome browsers. Each call can last up to 24 hours, and recording is available for thirty days.

Still, it can be annoying to see an icon pop up out of nowhere on the taskbar with a feature you haven't activated or installed. Most users have already adopted alternatives such as Zoom, Google Meet and Facebook Messenger Rooms to communicate with friends, relatives and co-workers during social isolation in the COVID-19 pandemic.

Fortunately, the build 20221 brings two small new features that might be more useful: