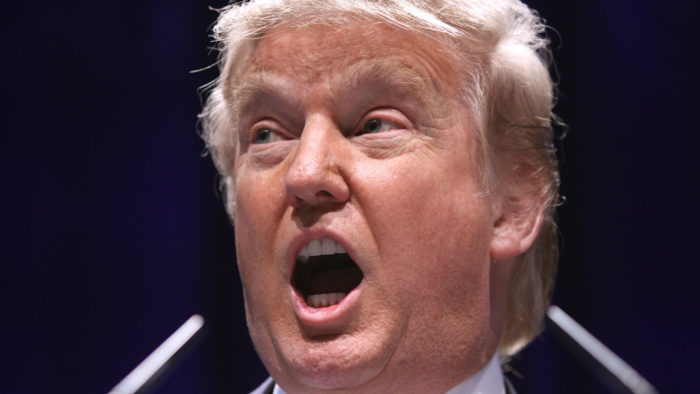 Donald Trump and Twitter are up in arms: a tweet published by the American president this Friday (29) ) was hidden for violating rules on the praise of violence, but remains on the air for “being in the public interest”. This came a day after the new US executive order that wants to put restrictions on social networks.

No On the 25th, a police officer killed George Floyd by kneeling on his neck for seven minutes while he was on the ground and handcuffed. This sparked a series of violent protests in the city of Minneapolis, Minnesota, including clashes with police.

“These VANDALS are dishonoring the memory of George Floyd, and I will not let that happen,” Trump said in the statement. Twitter. “I just spoke with [Minnesota Governor] Tim Walz and I told him that the Army is totally on his side. Any difficulty and we'll take control, but when the vandalism starts, we start shooting.”

Twitter explains that it acted “in order to prevent others from being inspired to commit violent acts, but we kept the Tweet because it is important that the public can still see it, given its relevance for ongoing matters of public importance.”

This week, Twitter placed a warning on another Trump tweet (without hiding it) : The message talks about mail-in voting in California, saying that it will lead to widespread fraud, and that anyone living in that state will be able to vote that way.

Twitter explains, using fact checkers as a basis, that both statements are wrong: voting by mail is already used in other states (such as Utah, Nebraska, and Oregon); is not linked to evidence of fraud; and can only be carried out by registered voters. 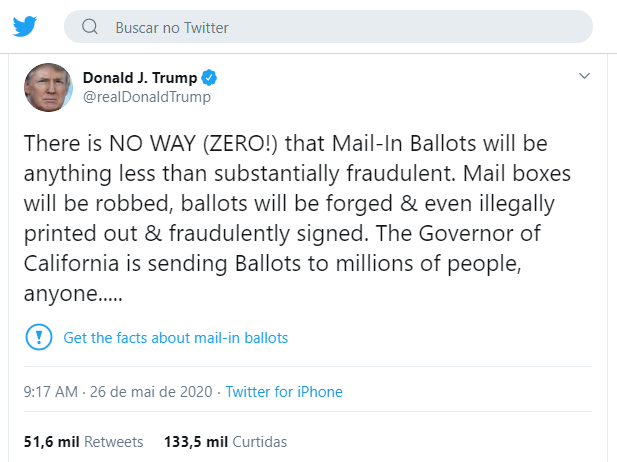 This prompted Trump to sign an executive order targeting social networks like Twitter. Part of a US law (section 230 of the Communications Decency Act) states that websites are not responsible for the content their users post, but must promptly remove anything that violates the law.

The Executive Order of Trump asks the FCC (US equivalent of Anatel) to propose regulations that "clarify" the meaning of section 230. In addition, the FTC (Federal Trade Commission) may investigate whether social networks have a "bias" that harms users. The two agencies are independent and may not approve these requests.

Twitter says that this executive order “is a reactionary and politicized approach to an already consolidated law”. Meanwhile, Facebook notes that changes to section 230 could have the opposite to what Trump wants: “by exposing companies to responsibility for everything that billions of people say around the world, it would penalize those who choose to allow controversial content, and encourage platforms to censor anything that could offend someone.”