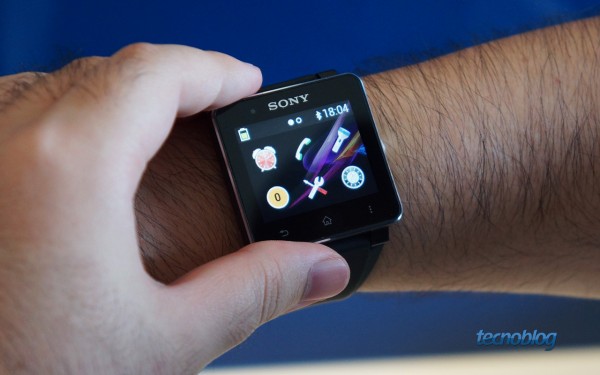 Smartwatch has never been talked about as much as it is now: Samsung recently launched the Galaxy Gear, the Qualcomm will start selling the Toq in December and the Pebble is gaining more and more users, not to mention the rumors that indicate watches developed by Apple, Google and Microsoft. Meanwhile, Sony launches its third smartwatch: it is called SmartWatch 2 and arrives in Brazil until the end of the year for 999 reais.

Like other watches that are being launched this year, the SmartWatch 2 is just an accessory and has no intelligence of its own: it needs a smartphone to perform all functions. When connected, the Sony watch displays notifications, takes pictures with the smartphone's camera, controls the music player, allows you to answer or decline calls, among other functions. It even shows the time.

How does it work?

The communication between the smartwatch and the smartphone is done via Bluetooth. If the smartphone has NFC, pairing the two is even more practical: just bring the back of the watch closer to the back of the cell phone. An application available on Google Play will be installed and will serve as a bridge to send the information to the watch and install the applications adapted to the tiny 1.6 inch screen.

Sony claims that the SmartWatch 2 is compatible with all smartphones running Ice Cream Sandwich or higher. It's a much broader list of devices than another recently released watch, the Galaxy Gear, which only works with select Samsung devices. Here, I was able to use it without any difficulties with the Sony Xperia Z1 and the Motorola Moto G, the latter without NFC.

After pairing the devices and installing the Sony app, you still need to install each app to the clock, which is a little inconvenient. Of course, not everyone needs Twitter notifications or wants a calendar on their wrist, but the most useful ones, like the call and SMS manager, as well as the control for the music player, should come pre-installed. 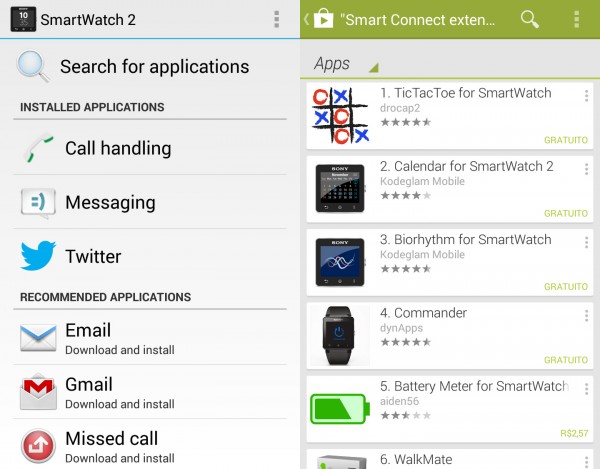 Then, when everything is set up, SmartWatch 2 will start to turn on the screen automatically to display some notification. In the default setting, when there is something new, the watch will also vibrate vigorously on your wrist to get your attention. There is no built-in speaker.

Looking at your wrist is more practical and natural than taking your smartphone out of your pocket, pressing the on/off button and opening the notification center to see a simple notification that, In the end, it might just be a useless SMS from the carrier. The issue of practicality is even more important if you have a large device, such as an Xperia Z Ultra (6.4 inches) or Galaxy Mega (6.3 inches), which sometimes won't even be tucked away in an easily accessible pocket.

Discretion is a plus point for those who don't want to be the center of attention. It's true that someone around you will notice that you're wearing something more technological on your wrist when the screen lights up by itself to display a notification or when you decide to change music on your watch, but, looking at it from afar, the SmartWatch 2 can go unnoticed as a ordinary watch. 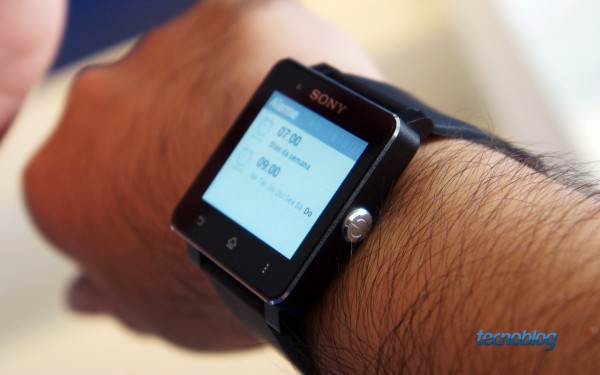 Yes, I am left-handed and I wear the watch on my right arm

It is not a tumbler, does not bother the wrist (despite the weight of 122.5 grams) and has a minimalist and elegant design, which matches the smartphones that Sony has been producing. The rounded silver power button, one of the main features of the current generation of Sony smartphones, is present. The front buttons (back, home and menu) use the same icons that the company adopts in Android.

With IP57 certification, the Sony watch is protected against dust and can be submerged in water for 30 minutes at a time. a depth of 1 meter, as long as the Micro USB port is closed. However, Sony is more cautious and only points out that the SmartWatch 2 “can take the rain”. No showering or swimming with the device, as the company does with smartphones like the Xperia ZR. Even so, it's a good point.

SmartWatch 2's small screen doesn't show anything very impressive in the spec sheet: the display is 1.6 inches, of only 176×220 pixels and LCD panel. The definition isn't the best: you can see the pixels without much difficulty, and the smaller fonts are slightly jagged.

But if the screen doesn't impress in theory, in practice it's really good: Sony adopted a transflective display, which transmits and reflects light, which makes viewing under the sun quite comfortable. Even with light falling directly on the screen, it is possible to see everything without any difficulty. In fact, outdoors, the more light, the easier to read what's on the screen. 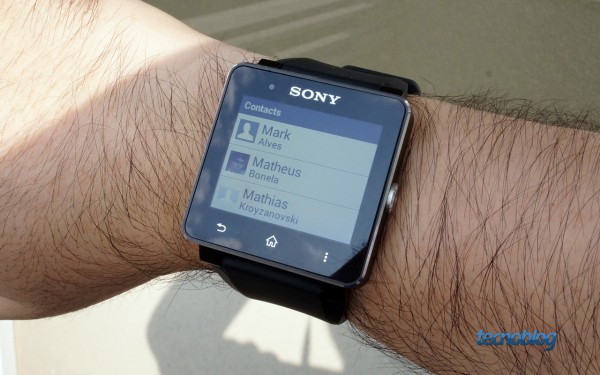 Yes, I'm hairy and no I want to shave myself

SmartWatch 2's screen is constantly on. You can easily see the time when the smart part of the watch is inactive. Press the side button and the screen will light up. Press it once more and you'll be taken to the home screen, which will display six app icons per page. You can sort alphabetically or by installation date. 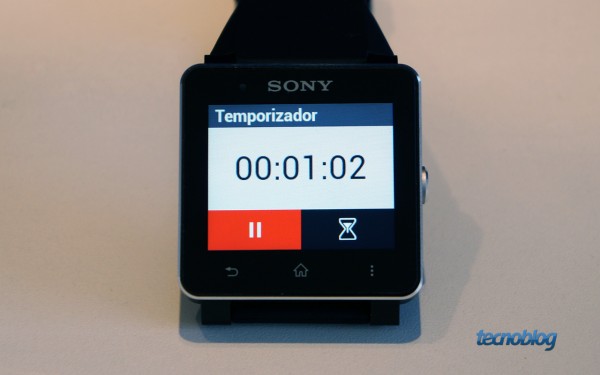 Not many native applications. It has the alarm and timer, which make the watch vibrate when the time comes. The dialer displays your phonebook contacts, call history and lets you call someone (but the call will be made from your smartphone). There's even a flashlight, which has the sole function of turning the screen all white – only the SmartWatch 2's screen is too bright for the tool to be of any use. 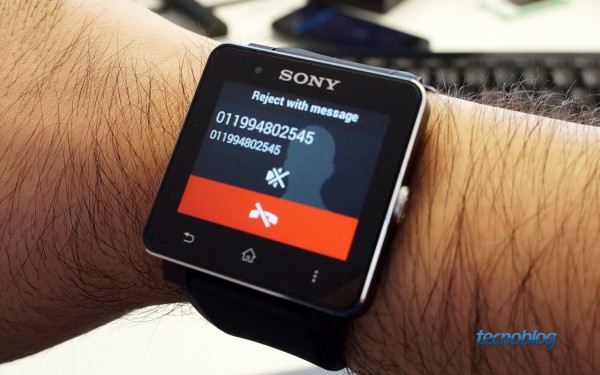 It is clear that the main purpose of SmartWatch 2 is to display notifications, but nothing prevents developers from distributing applications that operate autonomously. A quick look at Google Play reveals over a hundred apps for the watch. There are some older ones, aimed at the first generation of Sony's smartwatch, that get stretched or don't work properly on the SmartWatch 2. 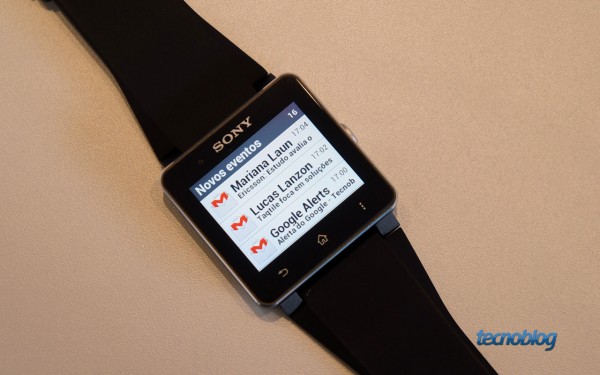 p>In the games section, there is Sudoku, Tic Tac Toe, Blackjack and a few more card games, in addition to the unforgettable snake game. There are several tools, such as a calendar, calculator, compass, speedometer and even a basic browser. Sports enthusiasts might like Runtastic Pro, which has an extension for SmartWatch 2.

Many apps are paid, which may annoy some buyers. For example, WatchNotifier, an app that makes the SmartWatch 2 display all system notifications, costs R$4.68 on Google Play. It is almost indispensable, even because WhatsApp, for example, is not officially supported by Sony: you will receive a message and the watch will not even notice it. 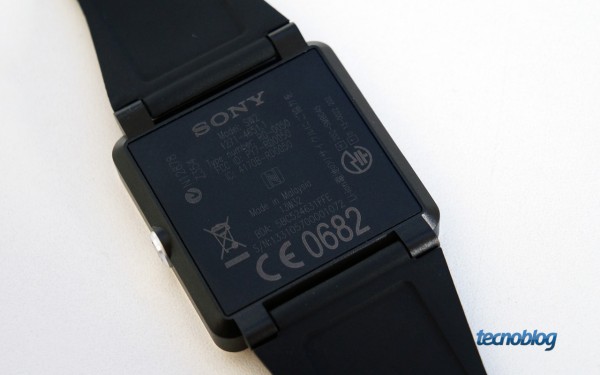 Sony promises that the SmartWatch 2 will last up to seven days with little use or three to four days with normal use, both with the watch always on. And the company doesn't exaggerate in the slightest.

The battery positively surprised me: with intense use and everything configured, I was able to use SmartWatch 2 for three whole days until the low battery warning (15%) appeared . Considering that I receive over a hundred emails a day and dozens of mentions on Twitter and I was interested in tweaking all the settings on the watch, I can say that the SmartWatch 2 battery does the trick.

Of course, it would be better if the duration were weeks or months, like an ordinary clock, but that's what we have for now. It won't become a hindrance, an additional device to remember before bed, not least because charging compbattery life lasts for only about an hour. I also didn't notice any relevant impact on the smartphone's autonomy, even with the connection activated all the time.

Is it worth it? 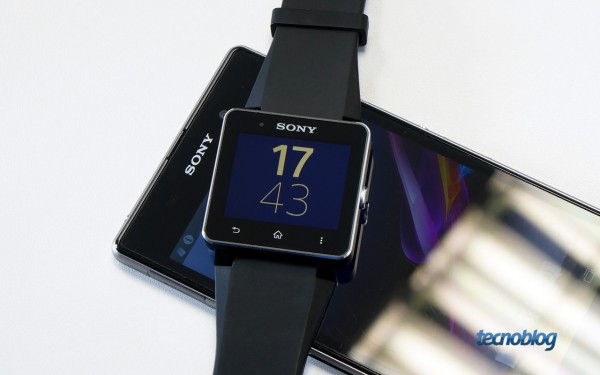 SmartWatch 2 is a nice (and expensive) accessory

The SmartWatch 2 is a good watch. It does what it sets out to do well, it has a design that I liked a lot and makes things more practical. Being able to immediately know why my smartphone is vibrating, with a simple movement of the arm, is useful, even if the watch does not allow for further interactions. You can't reply to messages, for example, because the SmartWatch 2 doesn't have a microphone like the Galaxy Gear, and a tiny on-screen keyboard wouldn't be practical.

The big problem is the price to pay for this little practicality. SmartWatch 2 is just an accessory that depends on the smartphone to perform all its functions. Regardless of the cost to manufacture a watch like the SmartWatch 2 or the taxes that Sony pays to import it, it is difficult to say that spending 999 reais is a good deal, even if it is cheaper than its main rival. Even the $199 charged in the US seems like a lot.