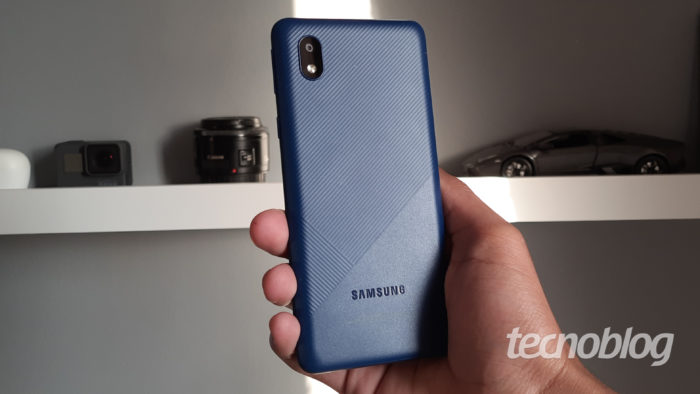 Samsung has yet another smartphone for the competitive entry market and it will most likely be called the Galaxy A02s. The device has been appearing in some benchmark services and approval agencies, the most recent being at the NBTC, which is located in Thailand and has more or less the same function as Anatel here.

The code that appeared is SM-A025F/DS, but the trade name will surely be Galaxy A02s. Rumors already aired by other sources claim that the phone will work with 3 GB of RAM, will have a Snapdragon 450 processor and it will come standard with Android 10 below One UI. The “DS” at the end of Samsung's internal code tends to indicate that the smartphone can use two SIM Cards at the same time.

According to the homologation document for the Southeast Asian country, the Galaxy A02s has a 5,000 mAh battery and works only with 2.4 GHz Wi-Fi – which is a pity. In Geekbench 4 a probable variant of it, with code SM-A025G, scored 3,934 points in the multi-core test and 756 points for the single-core test.

It is still too early to say that the Galaxy A02s will be released soon, but I believe it will be presented later this year and some week in November. It is at this time that the launches need to show up to take advantage of the end-of-year sales.

With information: Gizmochina and GSMArena.