Combining internet and pay-TV, Net and Globosat announce a new service for watching TV programs pay on the web. Muu comes with the proposal to provide content from the various Globosat channels to viewers who want access to that programming even when you're not at home — or when you don't feel like turning on the television to watch.

Right away , the list of programs available through the platform is timid. Among Globosat’s attractions, we find interesting ones: “Spartacus” (foreign series), “Cilada” (from Multishow), “Marília Gabriela Interview” (from GNT) and “Irritando Fernanda Young” (also from GNT). Films from the Telecine network will also be offered on the web: to begin with, Muu has given access to “Um Astro em Minha Vida”, with the well-known Morgan Freeman.

Films, series , documentaries and shows will be available for free on the site.

Program highlights at the Muu launch

The association between Net and Globosat can be explained by the shareholding composition of the companies. Both have Globo Organizations as an important partner, which generally speeds up this type of negotiation, which tends to be quite complicated due to content distribution agreements, which often depend on foreign companies (especially when We are talking about cinematographic productions).

In addition to entertainment, the Muu platform includes a diversified sports programming generated by the SporTV channels. Once again, this is a Globosat venture in the pay-TV market.

The strategy behind Muu is to retain the viewer, in addition to justifying the value of the pay-TV subscription. With the various devices to which we have access today, limiting programming to just TV no longer makes much sense. The decision reflects what is already seen in more mature pay-TV markets. In the United States, for example, you can download the CNN app for iPad and watch the channel live — as long as the user enters their pay-TV subscriber data (and it should be noted that the service is currently limited to a few operators) . 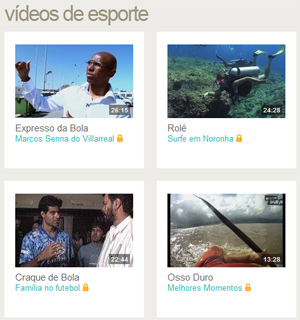 Sports videos on the Muu

The people responsible for the Muu state that, at the beginning, the video content archive counts no less than 1,400 hours. Bear in mind that a pay-TV program is usually half an hour long, and you can get an idea of ​​the size of this library (yes, yes, we can't ignore the films).

Muu is available to Net customers for now. The access infrastructure is provided by Globo.com, the internet arm of Organizações Globo. It is even necessary to have a “Globo.com registration” to use the service.

Curiously, Sky was not included in the deal. Believe it or not, the pay-TV operator also has Grupo Globo among its shareholders (although in a less privileged position than that occupied on the Net).

To watch Globosat videos without paying nothing more on Muu is necessary: ​​broadband connection of at least 1 Mega; monitor with a minimum resolution of 1024×768 pixels (which is not difficult nowadays) and Flash Player 10. It is also necessary to have a modern browser (Internet Explorer 7, Firefox 3.6, Chrome 10 and Safari 5).

In time: I still don't understand the choice of the name “Muu”. It has a well-known onomatopoeia that uses this same sound.