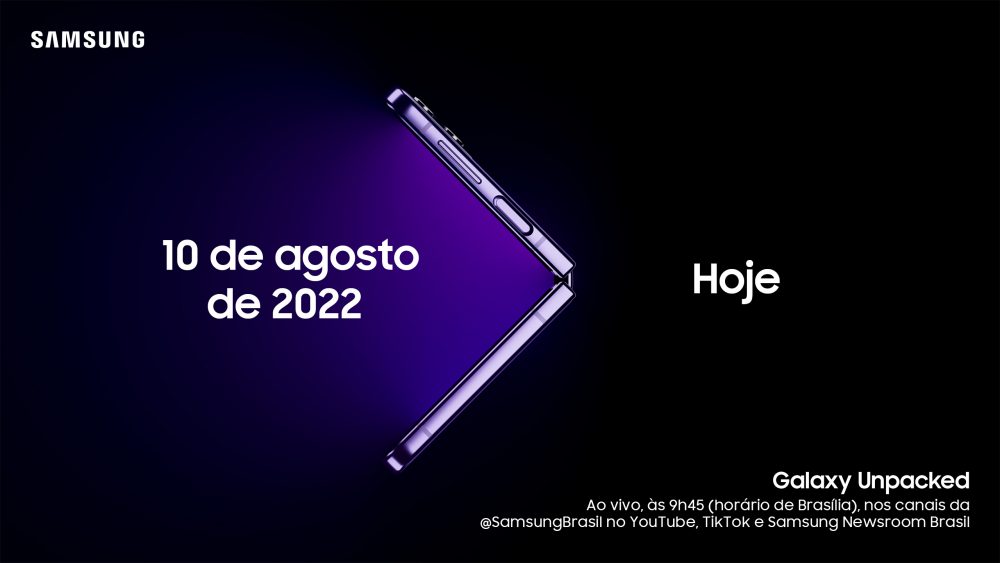 The Samsung will reveal new products soon. This Tuesday (19), the South Korean brand distributed invitations to the next Galaxy Unpacked, which will take place in early August. The expectation is that the event will be the stage for the debut of the new Galaxy Z Flip 4, Galaxy Z Fold 4 and the watches from the line Galaxy Watch 5.

As usual, Samsung hints at what to expect at the time — and also what we shouldn't see at this event:

“Innovation is not just about ideas radical, but it's about opening up to new experiences that transform our lives for the better”, says the statement.

The image that accompanies the invitation features a folding cell phone, with the well-known design of the Z Flip line, illuminating the likely announcement date of the new smartphone: August 10, 2022. Galaxy Unpacked is scheduled for 9:45 am ET.

What to expect from the Galaxy Z Flip 4 and other releases?

Samsung did not say which products will be unveiled during the event. But, based on the editions of previous years, it is expected that the brand will take the moment to announce its new foldable cell phones.

This is the case of the Galaxy Z Flip 4. The phone is expected to keep the same look as the previous generation, including the flip format. In addition, the smartphone must continue with a dual camera and must have an advanced datasheet with the Snapdragon 8 Gen 1 or Snapdragon 8+ Gen 1 processor.

O Galaxy Z Fold 4 can also follow in the footsteps of last year's model. The smartphone, on the other hand, should be announced without the base to house the cameras, just like the Galaxy S22 Ultra. The phone still tends to have a battery with a nominal capacity of 4,275 mAh in its advanced datasheet.

It is worth remembering that the Galaxy Z Flip 4 and the Galaxy Z Fold 4 have already been approved in Brazil. The duo still tends to arrive at stores with the charger in the box, as revealed by Tecnoblog.

The successors of the Galaxy Watch 4 tend to be presented In this ocasion. The Galaxy Watch 5 and the Pro variant are expected to retain the same aesthetic as the previous generation, but without the rotating bezel. Watches, however, should get more expensive.