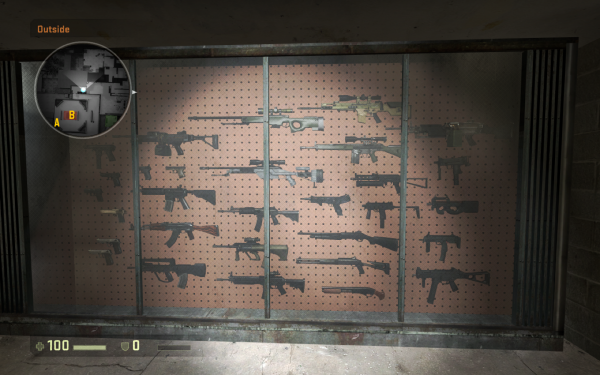 Almost 12 years ago a Half-Life mod appeared on the net, triggering a new craze. Lan houses were clogged with players who spent hours playing Counter-Strike. Who here has never turned the night in the so-called owls? More than a decade later, CS is back in the Global Offensive version. And the game, as much as it is a new face for an old acquaintance, has already made me want to call friends to spend the night playing once again.

CS: Global Offensive doesn't change much in relation to CS: Source or the Counter-Strike 1.6 that everyone should know. Still using the Source Engine, but this time with updated graphics. More beautiful and with an updated interface, the game has nothing new. The weapons are almost all the same and the game modes are limited to maps DE, Defuse, where the terrorists must plant a bomb, and CS, to rescue the hostages.

All weapons in the game. How many names do you remember?

Right away when playing, I come across old acquaintances. Classic maps like DE_Dust, DE_Aztec, CS_Italy and DE_Inferno got a new look. All more realistic, but without losing the familiar layouts and ways of playing. The little door at Aztec, for example, remains a very dangerous place.

Apart from the classic modes, a new weapon caught our attention. Call of Zeus, it's a single-shot taser. Why kill with a knife when you can discharge a few thousand volts to the nearest CT? Two other novelties were the grenades. The decoy grenade is the cheapest on the list and does nothing but fool the enemy that something might explode very close. Molotov is a bomb that, when it explodes, sets an area of ​​the ground on fire, dealing damage to all players that step on it. Very useful for small hallways and doors.

We also added two very similar game modes. The Arms Race is a race where the first player to kill an opponent with each weapon in the game wins. Without teams, it's a style of play along the lines of a Deathmatch. Demolition is another similar mode in which players start with the best weapons in the game and with each success when killing an opponent, he gets progressively weaker weapons until the final challenge with the knife.

Another novelty. It's about bots. In addition to being smarter now while you wait for a match to end, you can take control of one of the bots. Good for those who want to get into the action quickly and don't want to wait for the game to end. Very useful in those online matches where the entire opposing team decides to champion. The menus have also been simplified for purchasing weapons. Now instead of 8 categories it has been reduced to 6: pistols, SMGs (Submachine guns), rifles, heavy (heavy weapons like shotguns and machine guns), gear (equipment) and grenades.

The matchmaking system makes it very easy to find servers. At no time did I have to wait more than a few seconds to find a low latency server within the game mode I was looking for.

For those looking for a new game, CS Global Offensive can be a little disappointing, but, for those who are looking for something familiar and spend good hours playing an upgrade of the old known, CS:GO can be a beautiful choice. The game is available for US$ 14.99 (approx. R$ 31) on Steam for PC and Mac, as well as for Xbox 360 and PS3 on Live and PSN respectively.